The holding LLC would then make the S Corp election, and all the LLC income would flow into the S corporation as wholly owned subsidiaries. Remember, single-member LLCs are disregarded entities and are reported on the sole member’s tax return. In this case the sole member is a sexy and tax-efficient S corporation. Sexy and tax-efficient… probably went to far with that one. 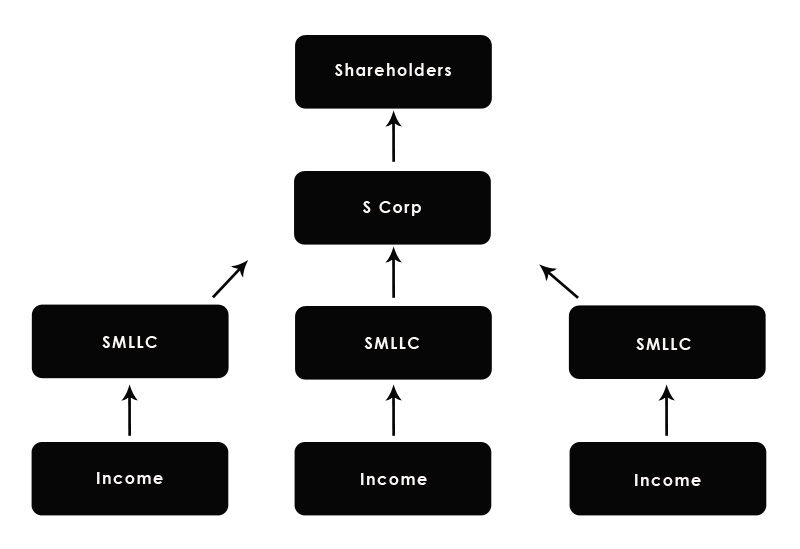 You might be saying, “Yeah, but, why not just have two S Corps?” You can, and in some situations you must (like an attorney and doctor as a married couple). The downside is the additional costs in tax return preparation and payroll processing. Conversely in the arrangement above, all the payroll for the shareholders is handled out of a single S Corp. Each single-member LLC (SMLLC) is a disregarded entity and therefore only a singular tax return is required at the S corporation level.

We rattled that off fairly quickly. Let’s break it down with some specifics.. An S corporation tax return preparation fee is generally $1,000 to $1,200, and the cost of processing shareholder payroll is about $800 annually. Let’s call this $2,000. By having two S Corps, you added $2,000 to your overall legal and professional services budget perhaps unnecessarily.

Another benefit is that one of these business units, subsidiaries or whatever you want to call them can be carved away and later sold off. You could also expand ownership in one without expanding ownership in the whole structure (we’ll show this later in the chapter).

Another inconvenience is that each entity might be slapped with high annual fees from the state in the form of filing fees, or franchise taxes (like California) or both. For example, if this arrangement was in California, there would be a minimum of $800 x 3 in franchise taxes. Nasty! The benefits might still outweigh the costs but be careful.

This is a common strategy between husband and wife teams where the business entities are completely different, yet the household wants to enjoy the benefits of an S corporation.

Side Bar: We must analyze limitations in each of the subsidiary LLCs. For example, you cannot have an LLC that would be deemed a hobby tucked under the “protection” of an S Corp. Each LLC must have a profit motive. There might be other limitations at the LLC level, but the hobby loss limitation is a wonderful illustrative point.

Want another? Section 199A Qualified Business Income Deduction has limitations for Specified Service Trades or Businesses (SSTB). Therefore, if one SMLLC is deemed an SSTB and another SMLLC is not, there will be some extra math calculations in determining the Section 199A deduction. 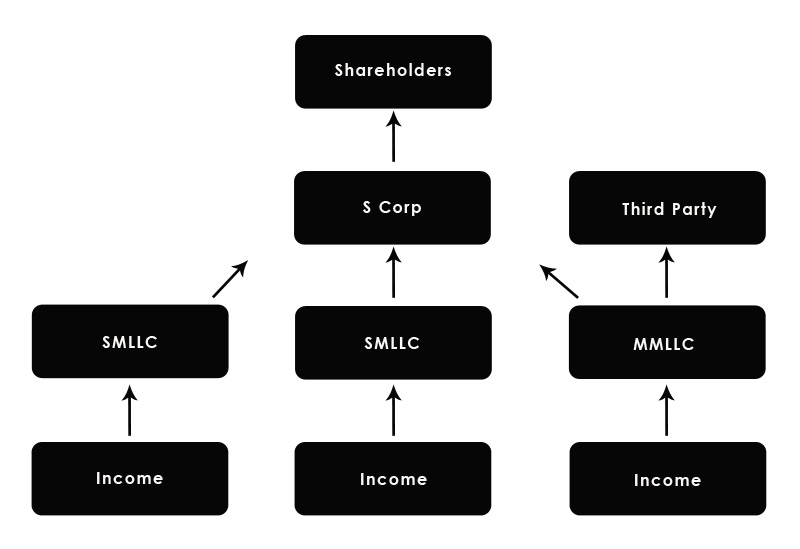 For example, you add a partner to the home remodeling LLC and it suddenly becomes a multi-member LLC (the MMLLC above). This entity would have two members; your S corporation and the other guy. The other guy could be an S corporation as well. In this schematic you would need two business entity tax returns; a Form 1120S for the wholly owned S Corp and a Form 1065 for the MMLLC (Partnership Tax Return). Your S Corp would receive a K-1 from the MMLLC.

You could also have the SMLLCs remain owned by each spouse individually. The SMLLCs could then pay the S Corp for services rendered, like a management fee, driving the SMLLC income down to a nominal amount, like $500. Why?

401k plans have all kinds of rules on controlled groups and discrimination rules, and we’ll explore more of that later in another chapter. However, if a husband owns SMLLC “A” and wife owns SMLLC “B,” each business can have a separate 401k plan. One could be filled with employees, and the other is just a solo 401k plan. This is provided that the spouses don’t participate in each other’s business (again, more on this narrow exception to controlled group rules in a bit).