Sounds like a dance move doesn’t? “Oh man, I hurt myself doing the Cali S Corp twist.” “Are you gonna need surgery?”

The problem with the previous MMLLC entity structure that issues invoices or makes fee for service payments, is that this works well in most situations except California. It still works in California as a structure, but the tax expense, namely the LLC fee, makes this egregious.

What makes matters worse is if the S Corps receiving income from the MMLLC are domiciled in California, they also have to pay a 1.5% franchise tax on the net income. Therefore, the same dollar might be taxed twice; once at the MMLLC level as an LLC fee, and again at the S corporation level as a franchise tax. Yuck. Super yuck!

What can be done? Simple! We elect the MMLC to be taxed as an S Corp. Hang in there on this one! 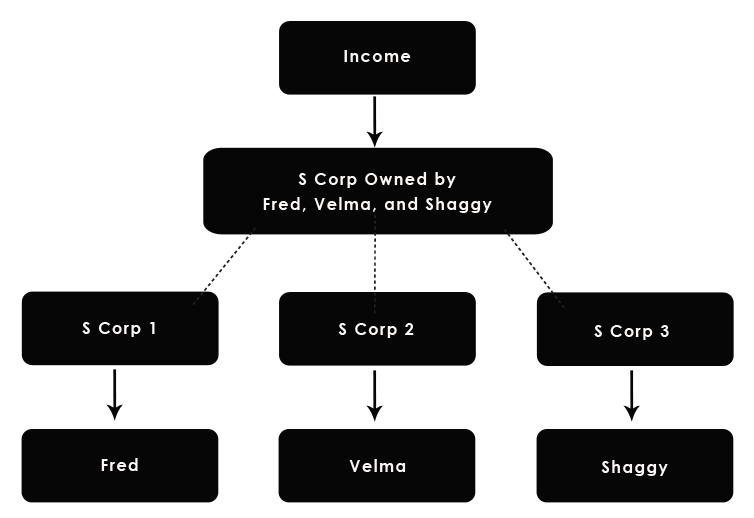 The graphic above is eerily similar to the previous one… except S Corp replaces MMLLC. The MMLLC is now taxed as an S Corp and Fred, Velma and Shaggy remain as shareholders. After paying the other S corporations a fee for Payments for Services Rendered or Outside Contractor or something similar, the MMLLC S Corp will have very little taxable income, such as $1,000. A franchise tax will be computed by California at 1.5% x $1,000 or $800, whichever is higher. Unavoidable.

The MMLLC S Corp would not pay salaries to its shareholders since the income is so low, and there isn’t any cash available. In addition, distributions theoretically should be $0 since all the cash is leaving in the form of payments to the other S Corps. There might be some goofiness if the MMLLC has depreciating assets or loans or some other transaction which causes net income to be something other than a $1,000 and shareholder distributions to be something other than $0 (we discussed this previously). The important takeaway here is the reduction of the LLC fee that California imposes.

Loan Basis in an S Corporation

This is a relatively common issue and when it pops up it can be brutal. As a partner in a multi-member LLC taxed as a partnership, if you personally guarantee a loan for the business, you create what is called loan basis. In a simple way, this allows you to take out more distributions from the business without creating a “distributions in excess of basis” situation which subsequently creates a capital gain.

If we are in California and want to reduce the egregious LLC fee, we S Corp elect the primary entity or “mothership.” But under the auspice of an S Corp, you cannot create loan basis without the shareholder providing a loan directly to the S corporation. Huh? At the risk of belaboring this issue too much, consider the following-

You buy a piece of equipment for $100,000 and took out a loan in the business name including a personal guarantee. You deducted 100% of the purchase price using bonus depreciation. You had cash revenue of $100,000 and a deduction of $100,000 for the equipment leaving $0 at net ordinary business income. Nice! But, you have a $100,000 in the business checking account and like most business owners you sort of kind of would like to spend it.

In a MMLLC taxed as a partnership scenario, you would have created additional basis by guaranteeing the loan allowing you to distribute this $100,000 without creating a capital gain. In an MMLLC taxed as an S corporation scenario, the $100,000 distribution would be in excess of shareholder basis and capital gains taxes might be incurred. Your starting shareholder basis at the beginning of the year would not change since the business had $0 in net income. So, December 31’s basis equals January 1’s basis, but you have a bunch of cash earned from revenues and you used depreciation to reduce your ordinary business income to $0. Depreciation can be a cashless expense to reduce income. Good and bad, right? No taxable income, good. But no access to the cash without capital gains tax, bad.

Had the S Corp shareholders lent $100,000 to the business personally, then they would have created loan basis. Speak to your lender before doing some of this stuff! If your lender can give the shareholders the cash to lend or inject into the S Corp, and still retain a lien on equipment, that might be preferred.

This is not a showstopper per se, but something to consider when S electing your California MMLLC to reduce the LLC fee.

Having said all this, there is a subtle difference we are not highlighting until right now. The above scenario is only problematic where you have a standalone S corporation. The three previous schematics were multi-entity arrangements with one distributing cash to the S Corp members as distributions and the other two distributing cash to the S Corps as fees for services or management fees or some other business to business mechanism. If the cash leaving the “mothership” is a distribution, this loan basis stuff can be a problem. If the cash leaving is a fee for service, this loan basis stuff is probably a non-issue.

Again, our apologies for getting into the weeds on this. We can always review your unique situation to help avoid this trap.