What if the structure did not have any employees and only had owners? This changes the rules a bit since now discrimination, or specifically, exclusions are allowed within 401k plan documents.

Let’s also go back to our example and say that Fred and Shaggy all had created solo 401k plans for each respective S Corp. This works, but only if there are no other employees other than owner-employees.

Here is how it looks- 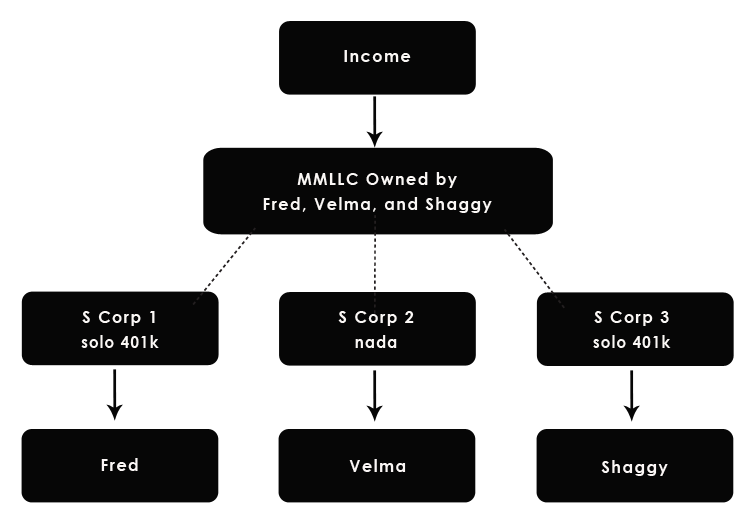 This would allow Fred and Shaggy’s S corporations to pay W-2 shareholder wages and make employer 401k contributions at the S Corp level. Beauty! Why should Fred and Shaggy have to plan for retirement in concert with each other, or worse be limited by Velma’s three ex-husbands who are bleeding her dry? You didn’t know that about Velma, did you? Messy.

As you can see Affiliated Service Groups and 401k plans don’t defeat the beauty of the MMLLC – S Corp schematic, it just makes it a bit more complicated. There are more rules about FSOs, ASGs, A-Orgs and B-Orgs… nauseating. Just remember the possible issues and to do the homework. WCG works with a handful of Third Party Administrators (TPAs) who can give you deeper advice, and defend the 401k and profit-sharing plans.

Here is a link to our referrals document-

401k plans are about $1,000 to $1,500 annually yet piggybacking a profit-sharing plan will add additional fees. You can custody the plan assets with any custodian who accepts outside retirement plans and TPA services.