WCG has implemented the poor man’s version of an ESOP where our primary entity is a C corporation which has a robust Shareholder Agreement for buying and selling of shares. Why do you need a Shareholder Agreement? If you own 5% of a privately held small business, you basically own 0%. Huh?

Unless there is a market (public or private) where the minority shareholder can sell his or her shares, a 5% ownership in a privately held small business is not marketable and therefore not as valuable. In the business valuation world we call this degradation of value a discount for lack of control (DLOC) and a discount for lack of marketability (DLOM).

Therefore, a business needs to create a market both on the buy and sell side. For example, CPA firms typically are valued at about 1.0 to 1.2 times gross revenue depending on the book of business quality (age of clientele, average fee, amount of recurring revenue, etc.). Using our example, you could set up a program where an employee could buy shares using a valuation formula. Let’s say you have a CPA firm and you believe the multiple is 1.2, and you also want to give your employees a 10% discount. You are growing and so you also want to use an average revenue number based on the previous two years to smooth out the value.

Your per share value formula would be (90% x Avg Revenue x 1.2) / number of issued shares. This could be used for the buy side, and on the sell side.

On the buy side you could allow employees to purchase shares annually. You could also issue shares as a form of compensation (yes, that would find its way onto a W-2). You could also use this arrangement for a future owner where he or she pays some cash and obtains bank financing for the remainder allowing acquisition of a large chunk of shares. Many business-oriented banks will put together a deal where the new owner puts in 20% and the bank finances the 80% using the original owners as a backstop for collateralization. In other words, the sellers or original owners would promise to buy the shares back from the bank upon default, should it occur. You might have to post collateral to satisfy the bank’s risk department. 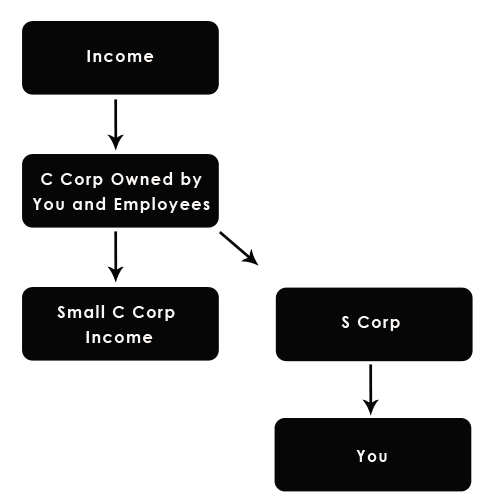 On the sell side you could allow employees to sell annually as well, and only upon separation from the business. By creating a market, a 5% minority ownership now has value. Some other considerations include that no person or entity other than current employees can own shares, and should an employee get divorced he or she cannot give the marital property to the other spouse.

Another consideration is voting rights. Do the minority shareholders have a vote? Perhaps by proxy? Ownership without a voice might not feel like ownership to your employees. How about wholesale sale? In other words, are the majority owners allowed to sell the entire business including the employees’ interests (usually Yes, through drag along rights)? Do the employees get a first right of refusal to buy out the majority owners?

Our example above was straightforward since CPA firms have enough market data to determine a gross revenue or sales multiple. Other businesses use multiples as well such as insurance agencies, financial advisor firms, franchised restaurants among several others. If a market approach to valuation using a gross revenue or sales factor cannot be used, a more complicated valuation approach or agreed-upon formula must be used.

How does the current owner(s) pull money out? Our schematic illustrates an arrangement that could be followed.

In our arrangement, income flows into the C corporation which is owned by you and your employees. A contractual arrangement would exist where the C Corp would pay your S Corp a management fee leaving a small amount of C corporation income behind (near zero).

A minor thorn to this arrangement is the accumulation of working capital at the C Corp level. As a business grows, it will need increased working capital. At WCG we peg that to be 5% of the current year’s revenue. Whenever you grow working capital, you will pay taxes on the growth since the money is left behind in the C Corp and not paid out as a fee for service to the S Corps.

This is a generalization and proper consultation with a tax professional (us) and an attorney (others) is a must. Under current SEC laws, such as Regulation D, and Colorado Securities laws, WCG does not have to register our stock as a regulated security. Your state might be different.