Ryan Fleischer tempted fate with an unreasonable salary and brought a case to the Tax Court that has reverberating consequences. In our opinion, had he been reasonable with his S Corp salary we wouldn’t be faced with this issue. As the saying goes, Pigs get fed and hogs get slaughtered. We are not comparing Ryan to a hog of course, but we are certainly mindful of the risks people take. Those who try to take too much end up in trouble.

Did Ryan try to take too much? It is hard to say since that is a matter of opinion. So, what is the issue?

Ryan Fleischer was a financial advisor for LPL and Mass Mutual, and he received payments and ultimately a 1099-MISC to himself personally. Per FINRA’s Rule 2040 compensation payments cannot be made to an entity unless that entity itself is a registered broker-dealer (and in some cases a Registered Investment Advisor, an RIA).

Ryan would report this income on Schedule C but then have a singular line item for “Other Expenses” resulting in a $0 profit. Too convenient, right? Through a random audit, the IRS issued a tax deficiency for all the years in question amounting to over $41,000. Here is a summary of his business income and salaries-

The salaries seem to jump out, don’t they? According to the Bureau of Labor Statistics, a personal financial advisor’s median 2017 pay was $90,640. Keep this in mind as we explore some other issues. Quick math would suggest that his salary was about a third of what the median salary was in 2017.

The Tax Advisor’s March 1, 2017, article summarized the crux of the Tax Court’s decision-

The Tax Court stated that, based on precedent going back to the Supreme Court’s decision in Lucas v. Earl, 281 U.S. 111 (1930), “the first principle of income taxation is that income must be taxed to him who earned it.”

In a case involving an individual and a corporation, the question that the court must ask is, “Who controls the earning of the income?”

For a corporation to be in control of the income, two elements must be present:

(2) “there must exist between the corporation and the person or entity using the services a contract or similar indicium recognizing the corporation’s controlling position” (Johnson, 78 T.C. 882, 891 (1982)).

The Tax Court essentially agreed with the IRS since Fleischer was named on the contract with LPL and Mass Mutual, and not his S corporation. However, as mentioned before, FINRA’s Rule 2040 was designed to make financial advisors accountable and transparent, but it also created a roadblock from a tax efficiency perspective. In other words, had Fleischer provided consulting services to a singular client, he could have entered his S Corp into a contract with the client and the client could issue a 1099-MISC to his S Corp’s EIN.

What can be done? First, the easiest thing to do is amend the contract between the financial advisor and the broker-dealer / investment advisor firm to give the S Corp privity to the contract (or some sort of recognition). The next step is to enter into an employment contract between you, the financial advisor, and your S Corp plus updating the Bylaws and Shareholder Agreement. Please contact us for some sample language that we’ve seen others use.

There is a company called Succession Resource Group (SRG), Inc. who positions themselves as being able to defend the “Fleischer issue,” and their contact information is 503-427-9910 and [email protected] Give them a shout. Again, according to SRG these provisions satisfy the Tax Court’s big gripe. That is the easy stuff, and it might require legal assistance.

Further, a lot of financial advisors, investment advisors, Certified Financial Planners, etc. are creating their own Registered Investment Advisor (RIA) firms and electing those to be taxed as an S Corp. Yes, registering your firm as a broker-dealer or registered investment advisor (RIA) with either the State or SEC (depending on size) can be expensive. Most RIAs can be formed for about $6,000 where broker-dealers are much more cash intensive between the registration fees and the capital requirements. 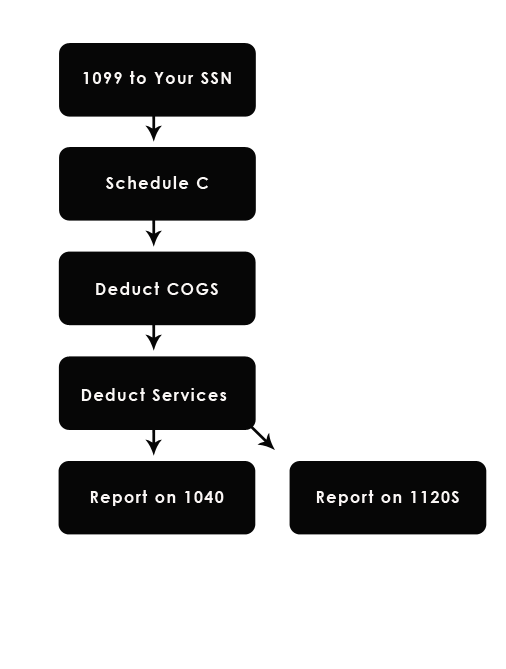 The other option, as other business consultants have kicked around, is to prepare a Schedule C with the income related to the activities governed by FINRA as issued on a 1099-MISC. From there “cost of goods sold” expenses such as advisor fees, technology fees, insurance and other expenses directly related to the generation of that income are deducted.

Does this appear like an end-around? Perhaps. Is it unreasonable? No, we do not believe so but at the same time this position has not been directly tested. Again, the tax discrimination that occurs simply out of a securities rule from FINRA is patently unfair given the financial burden of compliance. Fleischer sells his knowledge as a consultant, good to go. Fleischer sells his knowledge as financial advisor, no good. A technical housekeeping glitch is preventing good tax planning that most small business owners are able to receive.

Ryan Fleischer was well-represented by Howard Kaplan who pitched several good arguments, but in the end he lost. Ryan did not want to appeal to Federal court since he already spent $50,000 in legal fees; he might have also felt like his position was untenable given the current legal landscape. Unfortunately, this case shines a bright light on the common practice among tax professionals to nominate the income from an individual’s SSN to his or her S corporation’s EIN.

In our opinion, and the opinion of several other legal and tax professionals, had Ryan paid himself a reasonable salary he wouldn’t have gotten spanked so hard by the IRS. But that is conjecture, and certainly wasn’t an opinion expressed by the Court. However, in conversation with Ryan, he stated that the IRS audit was random yet he strongly feels it was deliberate because of his political party registration. Draw your own conclusions.

Having said that, our recommendation remains to start heading towards registering your business such that you can enter it into a contract with the broker-dealer / investment advisor firm.