Section 199A deduction, also known as the Qualified Business Income deduction, arises from the Tax Cuts & Jobs Act of 2017. This is a significant tax break for small business owners but there are rules and limits of course.

On January 18, 2019 the IRS and the Treasury Department released the Section 199A final regulations, including some related guidance such as IRS Notice 2019-7 for rental property owners. We apologize upfront that this blog post is delayed since there are some material changes to previous blog posts, but here we are… post-tax season. The Section 199A final regulation summary is over 240 pages. However, given our attention to small business owners and reviewing our current clients’ needs, we truncated this massive document into about 70 pages that you can zip through in an hour.

The Tax Cuts and Jobs Act of 2017 created a new tax deduction for business owners (and others) called the Section 199A Qualified Business Income Deduction. Later in August 2018, the IRS released Proposed Regulations 1.199A to offer some additional insight to Section 199A. The Treasury Department and the IRS held a public hearing on the proposed regulations on October 16, 2018 and later issued Section 199A final regulations summaries on January 18, 2019. Some of the major provisions of the 1986 tax code upheaval took over four years to resolve (such as passive activities).

Before we run through some of those finer details, here are some pertinent blog posts and other information that you might find useful.

Otherwise, freshen up that coffee and buckle up buttercup-

Pass-thru entities and structures include-

Specified Service Trade or Business is defined as-

Interestingly, removed from the traditional service profession are engineers and architects. But an engineer operating a business based on his or her reputation or skill is still a specified service trade.

Sit on the ledge, sure, but don’t jump off a bridge just yet. The specified service trade or business problem only comes up when your taxable income exceeds the limits. So, a financial advisor making $150,000 might still enjoy the Section 199A deduction. Keep reading!

Calculating the Section 199A Deductions

The basic Section 199A Qualified Business Income pass-through deduction is 20% of net qualified business income which is huge. If you make $200,000, the deduction is $40,000 times your marginal tax rate of 24% which equals $9,600 in your pocket. Who says Obamacare isn’t affordable now? Here is the exact code-

(2) DETERMINATION OF DEDUCTIBLE AMOUNT FOR EACH TRADE OR BUSINESS. The amount determined under this paragraph with respect to any qualified trade or business is the lesser of-

(A) 20 percent of the taxpayer’s qualified business income with respect to the qualified trade or business, or

(i) 50 percent of the W-2 wages with respect to the qualified trade or business, or

(ii) the sum of 25 percent of the W-2 wages with respect to the qualified trade or business, plus 2.5 percent of the unadjusted basis immediately after acquisition of all qualified property (in other words, prior to any depreciation).

There are some devils in the details of course. The best way is to show some examples-

Wilma makes $100,000 in net business income from her sole proprietorship but also deducts $5,000 for self-employed health insurance, $7,065 for self-employment taxes and $10,000 for a SEP IRA. These are not business deductions- they are adjustments on Form 1040 to calculate adjusted gross income. Her deduction is the lessor of 20% of $100,000 (net business income) or 20% of her taxable income, which could be less (see Pebbles below).

If Mr. Slate was married and operated a specified service trade, and the taxable income considering all income sources (spouse, investments, etc.) exceeded $315,000 but was less than $415,000, there would be a sliding scale of deduction eligibility. Silly rabbit, tax reform doesn’t mean tax simplification.

Fred… yes, we can’t neglect Fred… is single and operates an S Corp as an accountant. Days of busting up rocks for Mr. Slate are in the rear-view mirror. He earns $100,000 in net qualified business income after paying $50,000 in W-2 wages to himself. He is a clearly a specified service trade but because he earns less than $157,500 total ($150,000 in this example) he can take advantage of the full Section 199A deduction of 20% of $100,000. The question of reasonable salary is not being entertained here… focus on the W-2 to income relationship.

Betty becomes a slumlord and earns $500,000 in rental income. No W-2 since she is operating the properties as an individual (and converting passive income into earned income vis a vis a W-2 would be silly). Let’s say she purchased the properties for a $1,000,000 (unadjusted basis). The math would go like this-

There are examples with spreadsheets and other explanations at the end of this webpage. Warning- it is dry material and uses spreadsheets which makes it worse.

As you can see, there is some optimization that is necessary for a small business owner to get the most from the Section 199A deduction. On one hand we want to reduce W-2 salaries to shareholders to minimize self-employment taxes. On the other hand, we want to increase W-2 salaries so they do not limit the amount of Section 199A that is deducted.

This seems straightforward since payroll taxes are 15.3% plus some unemployment and other insidious stuff and the Section 199A Qualified Business Income deduction is 20%. However, the 20% Section 199A deduction must be multiplied by the marginal tax rate to obtain the true tax benefit. Even at a 37% marginal tax rate, the additional payroll taxes might exceed the Section 199A deduction tax benefit. Again, optimization is important. Here is our Knowledgebase article which expands on this topic (spoiler alert… the optimized percentage is 27.9% before wages are paid… so $100,000 in net business income should pay $27,900 in wages to optimize).

Remember that taxable income is all income for the household. The following numbers are using 2018 tax year data… but it is easy to remember. These income limits are the top of the 24% marginal tax bracket plus $50,000 for singles and $100,000 for married taxpayers. 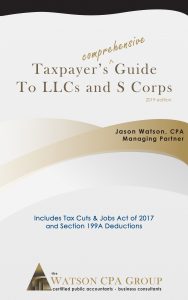 Our book, Taxpayer’s Comprehensive Guide to LLCs and S Corps, has been updated to the 2019 Edition which includes Section 199A deductions and other revisions based on the Tax Cuts & Jobs Act of 2017. If you’ve purchased it prior to the updates, please send us an email and we will forward you the latest and greatest version.

We are going to walk you through a handful of examples comparing non-S Corp scenarios such as sole proprietorships, single-member LLCs (disregarded entity) and other pass-through environments to those same situations being taxed as an S corporation. We will demonstrate the benefits of the Section 199A deduction, and how it plays into the “should I elect S Corp?” question.

Aside from the usual suspects such as not earning more than $30,000 in net business income after expenses or operating in Tennessee or New York City, every scenario provides an additional benefit by electing S Corp status on top of the Section 199A deduction.

Section 199A Calculation
There are four variables you need to assign values to, a definition to consider, one tax bracket to memorize and two phase-out numbers to understand.

Section 199A Deduction Limits
We explained the decision tree above, however we want to illustrate the iteration in a different way. The question becomes, “How do I figure out my Section 199A deduction?” Besides using expensive tax software and professional advice, you can consider this flowchart.

Assuming now that your taxable income is in the 32% marginal tax bracket or above, you must worm in some additional Section 199A limitations based on the following-

We created a handful of examples in our book and Knowledgebase articles with two intentions. One, to demonstrate how the Section 199A deduction is calculated and two, to show that an S Corp remains a critical tax reduction vehicle. Brace yourself for nauseating spreadsheets that are only meaningful to the spreadsheet designer. We hope our commentary and explanations make sense, and that the logic of the step-by-step iteration becomes clear. We might be dreaming…

Don’t forget! We have also created fictitious tax returns for Fred Flintstone operating an S corporation (he bought Slate Rock and Gravel from Mr. Slate). You can see side by side the differences between 2017 and 2018, using the new tax brackets, the new standard deduction and the Qualified Business Income Deduction (QBID) along with Section 199A. Click the button below-

How does all this Section 199A work? Do you want a tax projection with the new tax laws? Let’s schedule a time to chat!

Hopefully you are still with us and not in the fetal position sucking your thumb. To hammer these points home, the Section 199A small business deduction won’t help everyone and the S corporation still has some shine (although perhaps less in some situations) as an overall tax reduction mechanism.

Here is a summary of the previous examples (buttons above)-

Thank you for hanging in there!

The hot question since the passage of the Tax Cuts & Jobs Act of 2017 and Section 199A is, “Should I revoke S Corp status and go to C Corp?” The answer is No.

As you can see, a C Corp does not make sense after you add in capital gains tax on the dividends. This in turn makes sense- the lawmakers didn’t set out to kill S corporations. They set out to give every business owner a tax break. Geez… half of Congress (535 doesn’t divide evenly, we get it) probably run S corporations on the side.

And! There’s more! C corporations do not enjoy the 20% Section 199A deduction either. Pile that onto the numbers above for even more reasons.

So, please pump the brakes on the “I wanna dump my S Corp for the magical tax arbitrage offered by a C Corp” nonsense. Wow, that was harsh. We have expanded on this idea in a blog post as well. Check it out-

As you can tell, this webpage has grown to a ridiculous size. If you want a PDF version of this, use the button below. You might also want to check out our book, Taxpayer’s Comprehensive Guide to LLCs and S Corps, available on Amazon, Kindle and PDF. We just released the 2019 Edition which includes all this crud.

Here is our summary of the major issues recently updated by the final regulations, rental property safe harbor (Notice 2019-7) and how all this crud affects S corporations-