A simpler way to accomplish the same thing as above is to create three entities again, but the multi-member LLC is owned by you and the other guys, not the S corporations. While we showed the previous schematic, the following is the preferred arrangement for a host of reasons, especially state apportionment of income and business valuation (more on that in a bit).

The S Corps issue consultation, fee for service or management fee invoices to the multi-member LLC in the amount of the net business income split driving the multi-member LLC income down to zero, or some nominal amount like $500. In other words, the payments from the MMLLC to the S Corp would be recorded as Payments for Services Rendered or Outside Contractor or something similar (see dotted lines below).

Therefore, each human would receive two K-1s. One from the MMLLC or “mothership” for a small amount and another from his or her respective S Corp. Additionally, this still accomplishes the Eat What You Kill income splitting objectives and changes the color of money through distributions from each person’s “baby” S Corp. Flexibility plus tax efficiency. Brilliant! 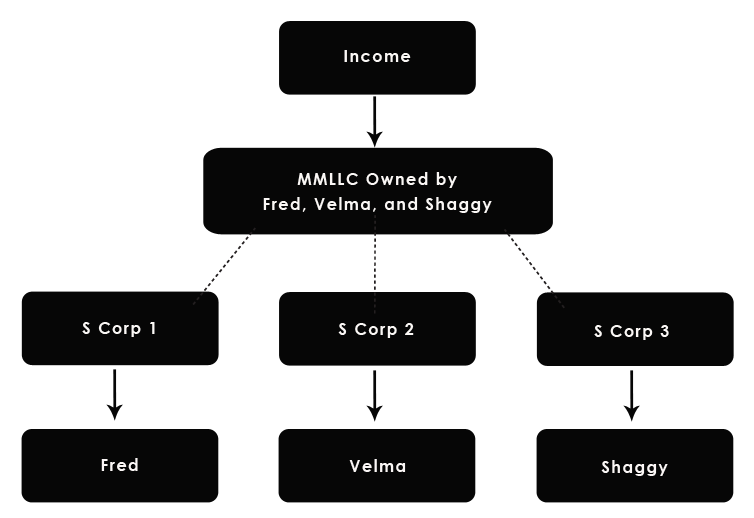 The above schematic is also preferred for regulated industries like financial advisors or real estate agents where entity ownership must be individuals. In some states and certain regulatory agencies, the MMLLC can be owned by S corporations provided the named principals are the licensed / regulated individuals… again, this arrangement avoids that issue.

Having said that, the “baby” S Corps typically must register separately with their regulatory body. For example, if you are band of attorneys wanting the mothership baby S Corp multi-entity arrangement with fee for service agreements, each S Corp would probably need to be registered as a law office with the state bar. This is a minor housekeeping detail, but an important one.

You might also reduce your exposure to state nexus based on revenue or income. If the MMLLC is a California entity issuing a small K-1 to an individual running an S Corp in Illinois, you will reduce the long-reach risk of California. What do we mean here?

Scenario 1 is where your Illinois S Corp owns member interest in a California LLC. The LLC will issue a K-1 to your S Corp and now you instantly have a very visible tax footprint in California.

Scenario 2 is where your Illinois S Corp provides a service to a California LLC in a business to business (B2B) relationship. You might still have a tax footprint in California, but you are in complete control since California does not instantly know about this not-so-visible relationship.

We are not advocating avoiding apportionment (the allocation of taxable income to other states), but at least you are more in control of what California knows and what they don’t need to know. They feel like they need to know everything, and they most certainly do not.

Do not issue 1099s in this scenario. First, a 1099 is only required to be sent to non-corporations. Even though you might have created an LLC and then later elected S Corp status, you are now considered a corporation for taxation and your vendors are not required to send you a 1099 (although many do).

Side Bar: Business tax returns such as Form 1065, 1120 and 1120S are usually prepared by tax professionals, and as such the IRS believes revenue has a much higher chance of being recorded properly, and 1099s are not necessary. It would also be ridiculous for Verizon to receive a million 1099s from its customers. Funny, Yes. But ridiculous.

Second, a 1099 has EINs and possibly SSNs. Since these dots can be connected by the IRS, the issuance of a 1099 might invite unnecessary scrutiny. The IRS agent’s question becomes “Why did you issue a 1099 to a partner rather than let the income flow through a K-1?” “To avoid taxes and headaches” is probably not going to go well during the audit.

A multi-member LLC with a zero for taxable income (or close to it) is a no harm no foul tax return. In other words, it flies well below the radar but it also above reproach. As stated previously, Fred, Velma and Shaggy would get two K-1s, one from the MMLC and another from their S Corp.