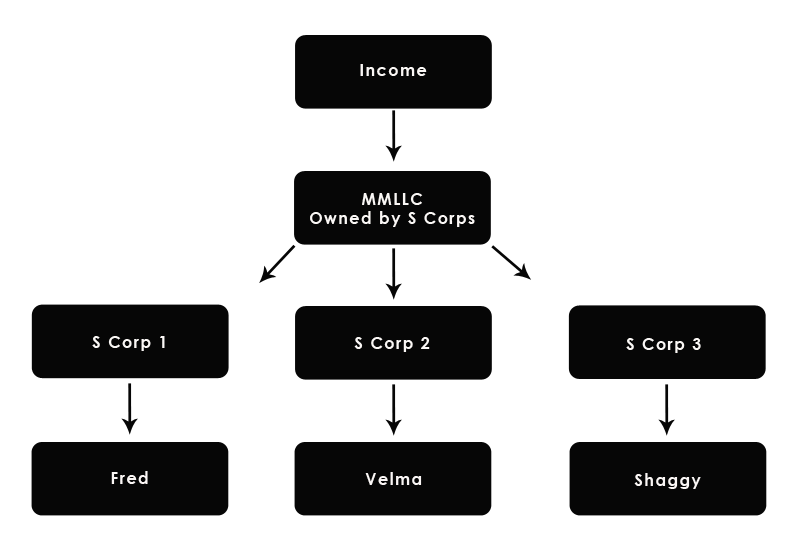 In this example, a 401k plan would be better implemented at the multi-member LLC level. Let’s dive into the details shall we?

Let’s say a law firm is structured as a partnership similar to the schematic above. There are three partners. Each partner is separately incorporated as a professional corporation and taxed as an S Corp. Each corporation has a one-third partnership interest in the law firm (MMLLC). The sole employee and sole shareholder of each professional corporation is an attorney who would otherwise be an individual partner of the law firm if he or she were not incorporated. Easy so far.

All billings for legal services are done by the law firm and partnership income is distributed among the corporate partners according to the Operating Agreement. The law firm is the First Service Organization (FSO) and each of the three S corporations is an A-Organization (A-Org) with respect to that FSO. The four organizations constitute an Affiliated Service Group (ASG). This is the “classic example” of an ASG and can create all kinds of problems with retirement plans.

How did we go from easy to yuck in just a few sentences? A business is automatically a First Service Organization (FSO) if it engages in one of the following fields-

This list should look a little familiar; it was the basis for the specified service trade or business (SSTB) designations for Section 199A. While you do not see certain professions called out, such as Financial Advisors, the IRS and ERISA are more concerned with function over form. Accounting + Consulting + Insurance might equal Financial Advisor. So be careful on trying to consider this list to be strict from a definitions perspective.

If you are an ASG, then the employees of all of the ASG businesses are deemed to be employed by a single employer for purposes of meeting the retirement plan provisions outlined below-

How does the IRS and ERISA find out? Challenging for sure! We’ve seen businesses run around with an ASG for a decade without a problem. But let’s say the IRS develops an app that allows them to peer over your shoulder. Aside from them telling you to floss more, they also notice your 401k plan.

Let’s also go back to our example and say that Fred, Velma and Shaggy all had created solo 401k plans for each respective S Corp. Bad. Since this is an ASG, solo 401k plans will not work. A traditional or company-sponsored 401k plan would typically be implemented at the MMLLC level and all the S Corp entities would implement the 401k plan as an adopting employer.

This would allow Fred, Velma and Shaggy’s S corporations to pay W-2 shareholder wages and make employer contributions at the S Corp level. Keep in mind that the 401k plan will be tested across all entities so discrimination rules would apply including top-heavy testing (which might require a safe harbor election).

Affiliated Service Groups and 401k plans don’t defeat the beauty of the MMLLC – S Corp schematic, it just makes it a bit more complicated. There are more rules about FSOs, ASGs, A-Orgs and B-Orgs… nauseating. Just remember the possible issues and to do the homework. WCG (formerly Watson CPA Group) works with a handful of Third Party Administrators (TPAs) who can give you deeper advice, and defend the 401k and profit-sharing plans. Here is a link to our referrals document-

401k plans are about $1,000 annually yet piggybacking a profit-sharing plan will add additional fees. You can custody the plan assets with any custodian who accepts outside retirement plans and TPA services such as American Funds,

However, spouses may have separate businesses with separate 401k plans without violating controlled group rules. This also allows each plan to be tested separately. For example, one spouse could have a business with employees and offer a 401k plan with safe harbor provisioning. The other spouse could also have a solo 401k plan for his one-person S Corporation.

(i)General rule. Except as provided in paragraph (b)(5)(ii) of this section, an individual shall be considered to own an interest owned, directly or indirectly, by or for his or her spouse, other than a spouse who is legally separated from the individual under a decree of divorce, whether interlocutory or final, or a decree of separate maintenance.

(ii)Exception. An individual shall not be considered to own an interest in an organization owned, directly or indirectly, by or for his or her spouse on any day of a taxable year of such organization, provided that each of the following conditions are satisfied with respect to such taxable year:

(A) Such individual does not, at any time during such taxable year, own directly any interest in such organization;

(C) Not more than 50 percent of such organization’s gross income for such taxable year was derived from royalties, rents, dividends, interest, and annuities; and

(D) Such interest in such organization is not, at any time during such taxable year, subject to conditions which substantially restrict or limit the spouse’s right to dispose of such interest and which run in favor of the individual or the individual’s children who have not attained the age of 21 years. The principles of § 1.414(c)-3(d)(6)(i) shall apply in determining whether a condition is a condition described in the preceding sentence.

Don’t get too wrapped up in controlled groups or affiliated service groups- just understand the basic premise of what you offer in one must be offered in others if a controlled group exists. We can help identify the problem and then steer you to people smarter than us on this extremely narrow topic.