Another thought along these lines involves a multi-member LLC where you and another non-spouse partner are the members. Later in another chapter you’ll learn that one of the limitations of an S corporation is that distributions must be made in the same percentage as ownership. So, if you are 50-50 with another shareholder, distributions must also be 50-50.

For now, let’s backup for a moment. If this multi-member LLC was not taxed as an S corporation, the Operating Agreement could dictate a different schedule of distributions. For example, you and another insurance agent team up. But you want an Eat What You Kill revenue model. In this case, you could be 50-50 partners from an ownership perspective, but have the splitting (sharing) of net ordinary business income after expenses and deductions, and eventual distributions fluctuate based on the production of each insurance agent. Elegant. Simple.

You S Corp elect this thing, and now it blows up. Regardless of the production or income splitting detailed in your Operating Agreement, or whatever, distributions must be 50-50 since that is the ownership percentage among the two shareholders. Said in another way, the net business income is assigned to each shareholder purely based on ownership percentages and cannot be changed easily.

You could always abandon the S corporation election idea, but you are a taxpaying citizen and want the best of both worlds. You want to save on self-employment taxes as well as having a fluctuating income split. What can be done?

The first solution is to equalize with salaries. Let’s say the revenue split based on production for the current year should be 55-45 but you are 50-50 owners. Salaries could be adjusted so that the “55% earner” obtains more of the available cash. This is an easy solution and works reasonably well when the net business income split closely resembles the ownership (or distribution) split.

But if the divergence between net business income and ownership grows too much then equalizing through salaries becomes problematic since the increase in salary for the “high earner” becomes too expensive; keep in mind, and we will reiterate this again later, every $10,000 in salary costs about $1,500 in payroll taxes. Therefore, if an unnecessarily high salary is needed to equalize net business income splits between S Corp owners you might be paying too much in payroll taxes.

What’s plan B then? Easy!

We create three entities. A holding company that is a multi-member LLC (MMLLC), with each member being an S corporation. Each S corporation is owned 100% by each principal involved. Stay with us on this one. The following example shows three S corporations as members of the MMLLC, but just ignore one side if you are a two-person show. 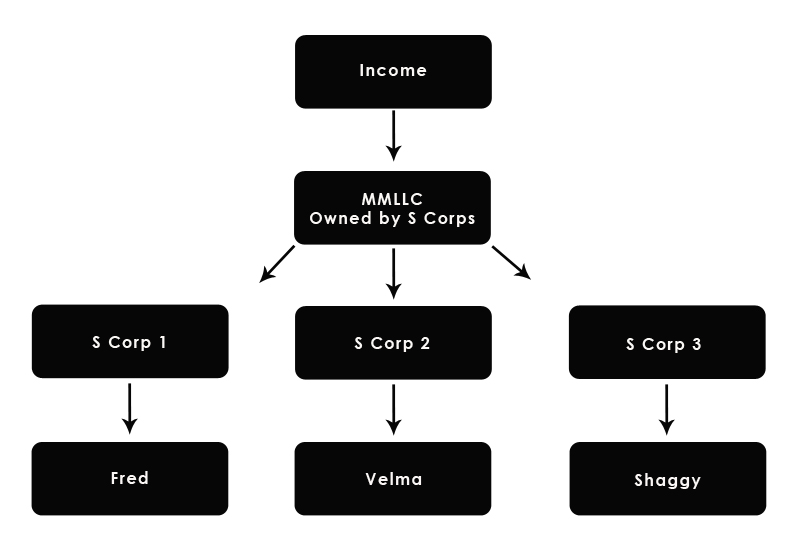 The MMLLC is really a funnel. All revenue goes in, all common expenses are paid out such as internet, copier lease, admin functions, etc., and an Operating Agreement dictates how the distributions are to be handled. K-1s are issued to the members which happen to be S corporations. And then those S corporations pay a reasonable salary to its respective sole shareholder and distribute the remainder.

There are some excellent benefits with this arrangement beyond the income splitting and saving of self-employment taxes. Each S corporation is independent. In referencing the previous schematic, there are some intangible yet valuable advantages-

Each S corporation can run expenses through as it sees fit without upsetting the other business partners. For example, you want to attend conferences in Las Vegas. Another example would be adding a child or spouse to payroll. Each S Corp operates independently and can do what it wants with its money (with some minor rules such as 401k plans).

We see this arrangement commonly in attorneys, medical groups (surgery groups, physicians, doctors, anesthesiologists, nurse anesthetists, etc.), insurance agents and financial advisors. It is very common in entities where the net business income is not shared equally, but rather on some formula or agreement.

401k plans in this situation is tough since it is a controlled group (technically what ERISA and the IRS call an Affiliated Service Group). More information can be found in a later chapter on controlled groups, and how retirement planning within this scheme works. This is a commonly overlooked problem with this arrangement; proceed with caution with your 401k plan administrator (spoiler alert: you can have separate 401k plans if you have only owner employees).

Wait! Before you blast off and create the above arrangement, this has fallen out of favor. There is another version of this where the MMLLC is owned by the individuals rather than the S corporations. Why? Let’s find out!