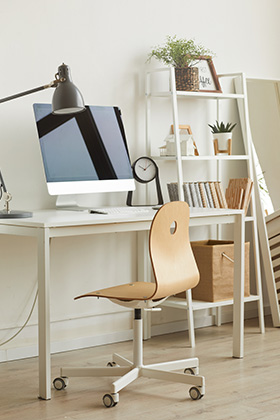 Home is where the heart is. But as the economy shifts and embraces remote work, more and more people find that home is also where work is. Working from home can be rewarding and liberating, but it also raises some tax questions. If you spend 5 minutes on Google or 5 hours at cocktail party, you’ll find tons of articles on the home office deduction, the two methods (actual vs. simplified), deducting home office maintenance and the other typical deductions you’re entitled too. That’s easy.

Today we’re going to focus on one of the not so common deductions; exterior maintenance.

The actual method is done by calculating a business use percentage of your home, typically based on square footage or room count, and deducting the pro-rated expenses against your business income. There are some devils in the details such as denominator adjustments for attics, garages and unfinished basements.

Moving on… chances are you have a space in your home that you use to do some business activities and you call it your office… hence the reason for finding this blog post. So… Ta da! Home office. What else is there to know? Blog post done… Colleen and Jason can go home early. Unfortunately, the IRS has a few basic rules (surprise, surprise, right?). And, the Tax Court has piled on some rules of its own, specially about exterior maintenance such as landscaping, window cleaning, exterior lighting, etc.

The three biggies in getting your expenses related to your home office deducted on your tax return are:

There are some other details to be concerned with as well such as the 50-mile home office rule and the multiple work location conundrum. Also, we have an article for business owners who have an S corporation and use an Accountable Plan for home office reimbursements. Here are some additional articles pertaining to those nuances-

When we think of exterior maintenance, we’re thinking about things like landscaping, window washing, and other services you might undertake to present and maintain a certain image of your home. This might be important depending on the nature of your home office. Basically, if you are inviting customers to your home office, the IRS and the Tax Court allow you to deduct exterior maintenance expenses. But wait! There’s more.

The exterior maintenance expenses must be ordinary and necessary. General landscaping and upkeep, yes. A luxurious fountain with exotic birds, probably not. Remember, ordinary and necessary are some of the IRS’s favorite keywords when it comes to a business tax deduction; ordinary is basically everyone in a similar trade or business has this expense, and necessary is an expense that is required for you to generate revenue.

How did we shape this rule about deducting home office maintenance including landscaping? As usual, some taxpayers got challenged along the way and helped create Tax Court cases. Here we go…

When it comes to a home office deduction, Hefti is still cited as case law precedent and is a fun read. Seriously! This case has it all. Mr. and Mrs. Hefti operated an audio-visual company out of their approximately 9,000 square foot home. They tried to convince the Tax Court that they and their two children only lived in 11% of the home and the remanding 89% was used solely for business (among other things). The Tax Court determined the actual business use was just under 8%. While many of the rooms the taxpayers insisted were solely business use did indeed have business equipment, the rooms were not exclusively and regularly used for business. Reminding us to not be greedy. Pigs get fed and hogs get slaughtered.

Although, the IRS won that the business use percentage was overstated, the taxpayers were able to substantiate the majority of their deductions. They had records, testimony, and even third-party evidence. The case helped establish the process of first determining if a) the deduction is substantiated (documented) and then b) determining if it is a deductible expense. So often in Tax Court we see taxpayers who would have normally won the case because of a good tax deduction logic, but failed to substantiate the expense.

Before there was Hefti, there was Rhoads, a dentist and his wife, a dental hygienist, who shared their living space with their dental practice. Their three-story home devoted one third, the first floor, entirely to the dental practice. The Rhoads were able to provide an invoice for window washing for the entire dwelling, but out of the 45 windows, the dental facility only had 7 windows, therefore the Tax Court declared they would be allowed an allocation of 7/45ths of the invoice. That was the windows component.

They were also granted 33% of the landscaping deductions based on the business use of the home (three floors, one floor was the dental practice, 1/3 is 33%, even in Canada). However, the taxpayers were unable to present credible testimony or documentation regarding the remaining outside services to which they would have been entitled. Where have we heard that before? Good tax logic, bad record keeping.

This case references a daycare center run out of the taxpayer’s home, which has some special rules unto themselves under Section 280A(c)(4)(c). Daycare centers not only consider the percentage of the home, but also the time devoted to the business. This can get a little tricky pretty quickly, so you may want to talk to us to determine the correct allocation if you have a daycare in your home.

In Neilson v Commissioner, the taxpayers used 89% of their home, 54% of the time to provide childcare services. However, the Tax Court determined that the lawn was used 100% for childcare and they were entitled to 54% (the time they operated) of their total lawn care expenses. This is considered a win for the taxpayer since deducting home office maintenance specifically landscaping was allowed. IRS Publication 587 has all kinds of stuff including daycare provisions.

Finally (yes, last one, pinky swear), we have the Langers, who weren’t as lucky as our last three taxpayers. The Langer’s each had a Schedule C business operating out of their home (meaning no extra business tax returns like corporations and partnerships). However, they were not great at documenting their expenses or even separating out their personal and business expenses. Shocking, we agree.

For example, the taxpayers tried to make the claim that as a piano teacher their pool was 100% business use because parents sat by the pool while their children took piano lessons As you can imagine, the related pool maintenance deductions got shot down because the logic was a huge stretch. Further, the pool area didn’t meet the exclusive use clause for claiming home office space.

The taxpayers also capitalized their exterior maintenance costs over the years. The Tax Court was not completely opposed to this method, however, the landscaping improvements take on the life of the underlying asset, which was land. Land is not depreciated, so unfortunately for the Langers, depreciation was disallowed on their landscaping. Bummer.

But, the taxpayers had also installed exterior lighting for the benefit of their clients and the Tax Court allowed a depreciation deduction. It should be noted that lighting was depreciated at a life of 39 years (home office depreciation life) and then multiplied by the business use percentage. So, let’s break this down a bit. You spend $2,500 on exterior lighting. That is depreciated for 39 years or $64.10 per year. Let’ say the business use is 10%, and therefore you get a $6.41 deduction per year. Your tax rate is 24%, for example, so your tax benefit is $1.54. Maybe the juice isn’t worth the squeeze.

Colleen Kern, CPA is a tax professional for WCG (formerly Watson CPA Group), a business consultation and tax preparation firm, and is part of the business development team.